The Five Fields of Knowledge

Knowledge of Tibetan culture is traditionally classified into five great ‘Fields of Knowledge’ (rig gnas che ba lnga) or ‘Five Sciences’. The London Institute of Tibetan Studies offers lectures and courses related to the five Fields of Knowledge. The Institute also offers links to other academic bodies such as the School of Oriental and African Studies (SOAS) in London and other branches of the International Shang Shung Institute.

Sacred art is considered to be one of the most important aspects of traditional Tibetan culture, since it embodies all activities of Body, Speech and Mind.

The dimension of our ‘Body’ manifests as sculpture, traditional thangka painting, carving and so on. Courses in this area include iconometry, iconography, mythology, materials, techniques and so forth. The practices of Yantra Yoga and Sacred Dance are also included in this area.

In relation to the dimension of ‘Speech’, this Faculty will offer courses in calligraphy. This will include a study of the development of various Tibetan and Indian calligraphic styles such as the ‘lantsa’ script, ‘dbu can’ and ‘dbu med’. Ancillary courses will also include drama.

The dimension of ‘Mind’ is related to the construction of Stūpas. This science also includes architecture, tailoring, jewellery and so forth. 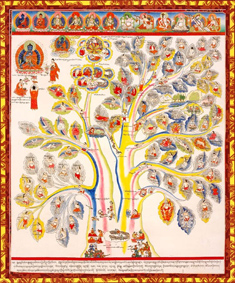 Tibetan medicine, known as ‘Sowa Rigpa’ in the Tibetan language, is an ancient form of natural medicine indigenous to the Tibetan people. It is still practised today throughout Tibet, the Himalayan regions, India, Mongolia, Siberia and in the Western world wherever Tibetans live in exile. Considered among the most essential of the ten Tibetan subjects of study, ‘Sowa Rigpa’ has benefited the people of Tibet and its surrounding regions for centuries. This knowledge is contained within thousands of Tibetan texts and principally in the Four Medical tantras, or ‘rYud-bzhi’. These Four Medical Tantras have been the primary teaching texts for training Tibetan physicians from ancient times to the present.

The Tibetan medical system is a complex synthesis developed over millennia drawing on both indigenous Tibetan culture and elements from other traditions such as the Greek (via Persia), Ayurvedic (from India) and Chinese systems. Integrating these with the already robust pre-buddhist culture of ancient Tibetan civilization known as Zhang Zhung, Sowa Rigpa flourished amid intercultural dialogues with the leading physicians of India, China, Nepal, Byzantium and Persia who traveled to Tibet as early as the 7th century. These exchanges resulted in a magnificent body of accumulated knowledge unrivaled for its depth of understanding still intact within a vast literary tradition unknown outside of Tibet until recent times. Over the centuries, practitioners of Tibetan medicine have learned how to diagnose, differentiate, and categorize diseases and the influences of external factors such as timing, provocation, and imbalances in diet and behavior. They conducted research and developed treatment principles for physical and mental imbalances and diseases.

This evolution also resulted in a vast pharmacopoeia of medicinal plants native to the Himalayas which were identified, gathered and processed according to ancient prescriptions as well as other external therapies such as Kunye [Tibetan massage], moxabustion, and vinisection [blood-letting]. Unique to Tibetan medicine is its philosophical view based on Buddhism in which the body/mind relationship is interconnected to all phenomena. This holistic view informs the Tibetan medical tradition, which uses sophisticated diagnostic techniques of pulse diagnosis and urine analysis in order to determine systemic imbalances—both mental and physical.

As early as the 6th century BC, the Buddha taught using illness as a central metaphor for suffering, and healing as the primary intention of the Buddhist path to liberate beings from ignorance, the source of all suffering. This philosophical view of Buddhism permeates all aspects of Tibetan culture including Tibetan medicine, which continued to evolve according to the teachings of the Buddha in a richly informed philosophical base not shared with other indigenous healing traditions. Thus, the Tibetan medical system developed into a sophisticated body of knowledge, which encompasses mental and spiritual factors, not just physical, in the diagnosis and treatment of disease and the promotion of well-being and a healthy balanced life. In response to the needs and possibilities of different individuals, the Shang Shung Institute has developed several course options.

The study of the Tibetan language starts with ancient grammatical treatises such the ‘Thirty verses’ (sum cu pa) and ‘Use of Gender Signs’ (rtags ‘jug pa) by Thonmi Sambhota, as well as on many other later commentarial texts authored by greatly accomplished scholars.

Logic is the study of the rational, conceptually consistent mind as it operates on itself and on the phenomenal world. Through close examination of traditional texts, courses in this field teach us how to use reasoning, based on direct perception and inference, to establish existence and non-existence and so forth with regard to phenomena.

Buddhist studies and meditation includes all the various doctrines and methods that are taught so that individuals can understand their own real condition and, according to their capacity, attain freedom. These derive from texts found in the great Buddhist canonical collections of Tibet belonging to all traditions.

Courses in this field will begin with the study of various teachings which do not require any form of transmission. More advanced courses will include studies and practices which are related to the Dzogchen transmission of Chögyal Namkhai Norbu or another qualified master. The requirements are a willingness to receive transmission and to keep the Samaya (commitment) that transmission entails. Students will of course have ample opportunity to discuss this further as they study.