Skip to content
FacebookYoutubeInstagram
Home Events Archive SSIUK Lecture: ‘A Foot in Many Camps-Taranatha (1575-1634) and his Relationships with Secular and Religious Power ‘ with David Templeman 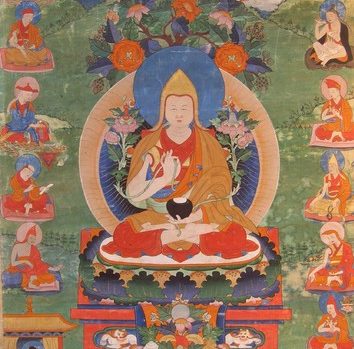 SSIUK Lecture: ‘A Foot in Many Camps-Taranatha (1575-1634) and his Relationships with Secular and Religious Power ‘ with David Templeman

Taranatha lived in turbulent times in Tibet, times which shaped that land forever. Politics made it essential for certain eminent Lamas to deal with patrons and rulers who they might not have wanted to deal with in easier times. Among these Lamas was Taranatha, some of whose patrons were the rulers of Tsang province. It was these rulers who strongly and generously supported Taranatha’s Jonang tradition. This tradition was strongly opposed by the Gelugpa and  in the last 15 years of Taranatha’s life the many pressures exerted on him in his last years from the Great 5th Dalai Lama’s government  became quite unbearable.

The talk will deal with the types of relationships Taranatha had with power, the manner in which he appears to have evaded the more outrageous pressures on him to support warfare and the ways in which it could be suggested that he ‘escaped’ from these pressures by envisioning a future place for himself away from the political troubles in Tibet. In his early and  mid-life one of the more interesting of these strategies was to establish a place of safety in northern India with the Baghela rulers in the Vindhya Hills with whom he felt he had a strong spiritual relationship.

David Templeman first met Tibetans in 1967. He then travelled in Tibetan areas in Nepal through much of 1969. He worked as a volunteer teacher at the Tibetan Children’s Village in Dharamsala from 1970 to early 1972. Thus started his study of the Tibetan language and he became interested in the person of Taranatha (1575-1634) and particularly about his work on the deity Tara, resulting in his first publication, a translation of his ‘Origin of the Tara Tantra ‘ in 1981.

Since then David has worked almost exclusively on Taranatha’s writings- which have covered his life and times as well as his biographies of his lineage predecessors and the Indian siddhas who formed part of his lineage.