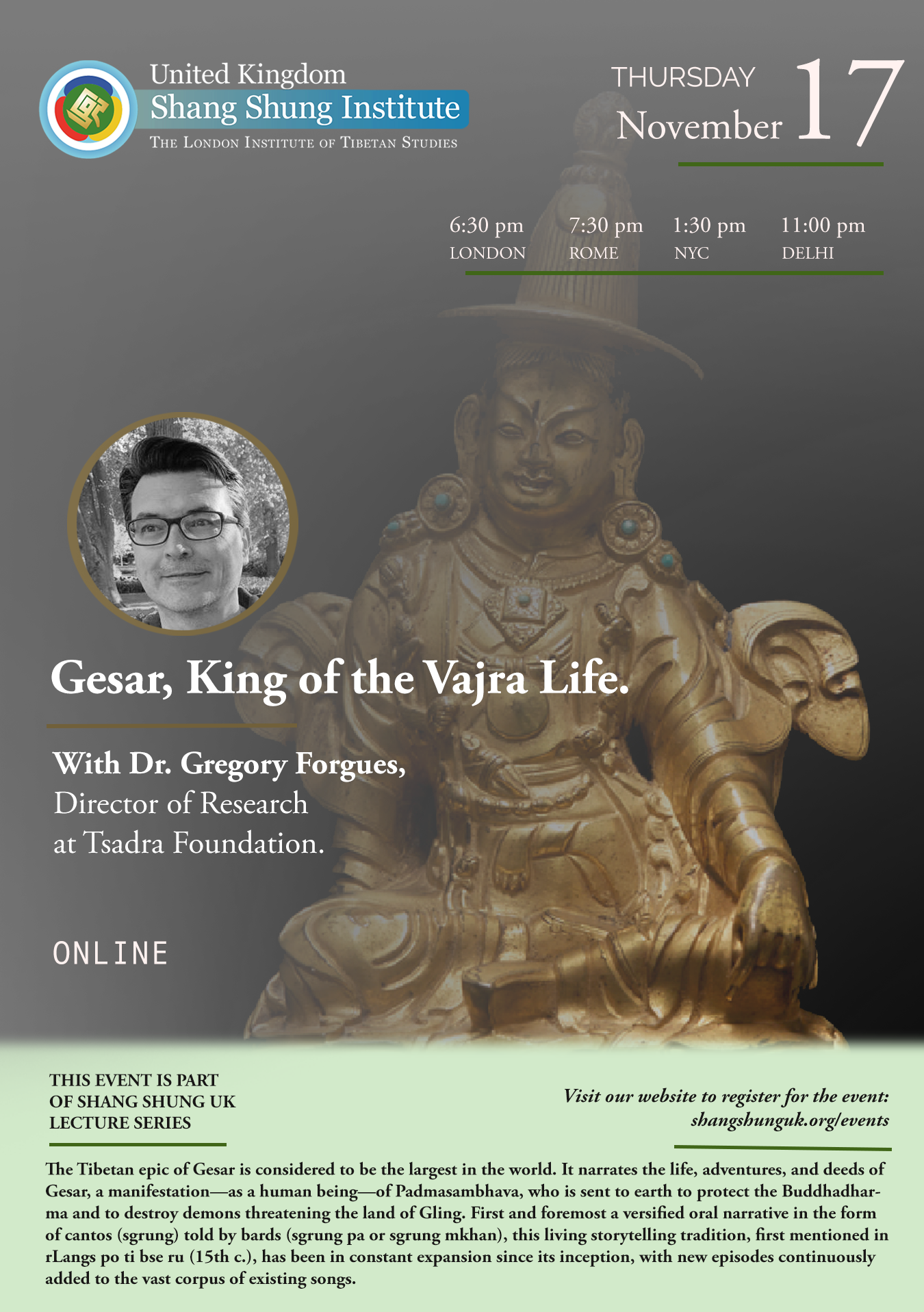 Gesar, King of the Vajra Life

The Tibetan epic of Gesar is considered to be the largest in the world. It narrates the life, adventures, and deeds of Gesar, a manifestation—as a human being—of Padmasambhava, who is sent to earth to protect the Buddhadharma and to destroy demons threatening the land of Gling. First and foremost a versified oral narrative in the form of cantos (sgrung) told by bards (sgrung pa or sgrung mkhan), this living storytelling tradition, first mentioned in rLangs po ti bse ru (15th c.), has been in constant expansion since its inception, with new episodes continuously added to the vast corpus of existing songs.

A later religious development in Mongolia and Tibet that finds its source in this epic is the propitiation of Gesar as a Dharma protector, and later, as a yidam. Gesar, as a manifestation of Padmasambhava, is usually associated with Buddhist tantric rituals pertaining to auspiciousness, happiness, and protection. In the region of Khams, Ris med masters revealed important gter ma cycles of rituals and practices in which Gesar is the main deity. In these texts, Gesar is worshipped as a protector as well as the manifestation of the ultimate guru. Historically, these gter mas constitute a vast corpus of Vajrayāna practices that is inextricably related to the epic. However, the gradual integration of Dzogchen teachings in these Ris med rituals gave them a unique character at the intersection between the Buddhist path and the Tibetan culture as exemplified by Mipham Rinpoche’s famous prayer to Gesar, the King of the Vajra Life.

Dr. Gregory Forgues is Director of Research at Tsadra Foundation. Before joining the foundation, Gregory was part of the Open Philology research project with Professor Jonathan Silk at the University of Leiden. He also worked as a post-doctoral researcher at the University of Heidelberg and a Visiting Professor of Buddhist Studies at the University of Bochum. Gregory has published on a wide variety of topics including Mahāyāna sūtra translations, Tibetan tantric rituals, Dzogchen teachings, and digital humanities methods. His PhD dissertation on Jamgon Mipham’s interpretation of the two truths under Prof. K. Mathes’ supervision was reviewed by Professor Birgit Kellner and Professor Matthew Kapstein, receiving a distinction from the University of Vienna.