Excerpt From: THE SPIRITUAL ODYSSEY OF FREDA BEDI: England, India, Burma, Sikkim & Beyond. published by Shang Shung Editions in September 2017.

I met Freda Bedi not in her life but in her death. From the little I knew, I imagined her an English memsahib, a vestige of the British raj, a great organizer, a doer of good deeds, an Oxford-educated aristocrat.  In photographs, she was to be seen always standing behind her guru, the great Sixteenth Karmapa, her large deep-set eyes glowing with tender devotion, her gaze showing no trace of a history that could have been any other.  I saw her simply as a nun in maroon robes, although on closer inspection, her face showed she had drunk deeply of a potent spiritual elixir. Nonetheless I thought of her only as a quiet presence in the eclectic entourage of monks, spiritual seekers, and hippies of the 60’s who surrounded the Sixteenth Karmapa. Her death in 1977 had been barely noted in Buddhist circles. 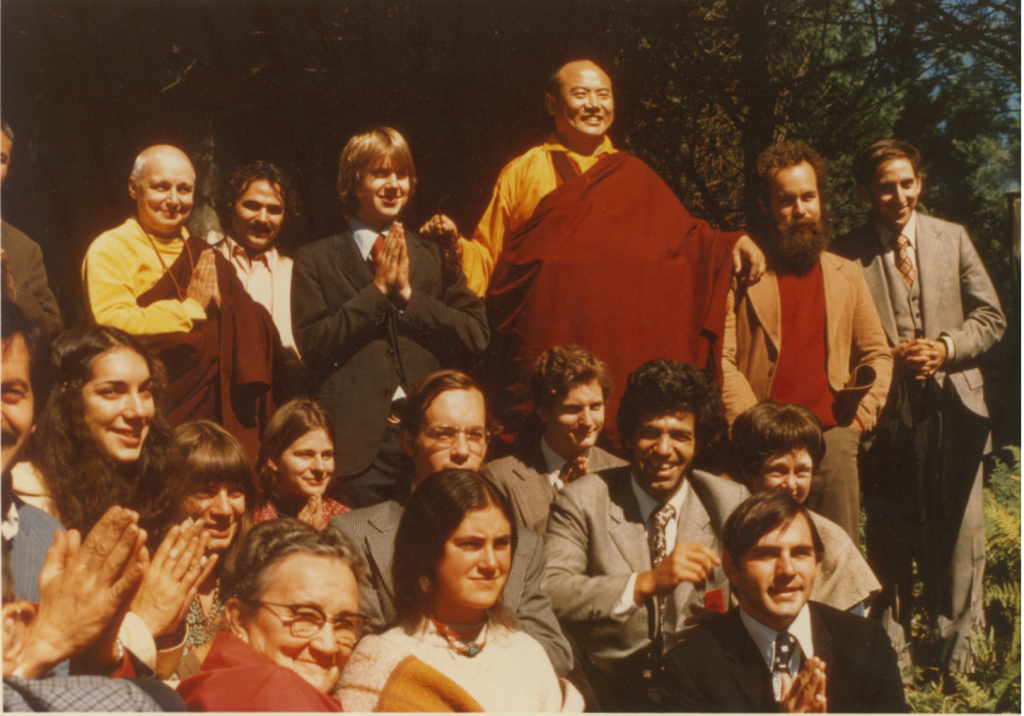 But when her attendant Anila Pema Zangmo described the manner of her death, I had to reconsider my first impressions. Zangmo described her death as manifesting signs that indicated Freda Bedi had reached a high level of realization. Implausible as it seemed, Freda, the daughter of a watchmaker from Derbyshire, might have been a bodhisattva, a remarkable incarnation. Why had I never heard this? Such things seldom pass unnoticed in the Buddhist world where news of a conscious death usually travels far. As I delved deeper, I was intrigued by the mythic dimension of her life’s journey and its conclusion amid signs of the miraculous.

Anila Pema Zangmo was an unusually confident Tibetan nun.  She had every reason to feel blessed by the Buddha in the spring of 1980 when I first met her at Sherabling, the monastic seat of Tai Situ Rinpoche where I had lived for five years.  The monastery spread like a fan on three ridges high in the Dhauladhar Mountain Range of the Kangra Valley, thirteen kilometers from where Freda Bedi had built a simple retreat house in the village of Andretta.

Pema Zangmo had been the lifelong attendant of the first Western woman to be ordained as a nun in the Vajrayana or Tibetan Buddhist tradition. After Freda’s death in 1977, she had continued to develop Tilokpur, her nunnery, located on a site above the cave of Tilopa, an enlightened Indian master who had meditated there a thousand years before. Now here was Ani Zangmo, strong enough at the age of forty to manage the construction of a nuns’ retreat center in a pine forest on the western slope of Sherabling.

Pema Zangmo’s karma had borne fruit of an unusual kind for a village girl from a simple family. Only the most fortunate see with their own eyes the fruition of a spiritual path or bear witness to the signs of attainment, as she claimed to have beheld.

Born to a Buddhist family in a remote village in Himachal Pradesh, at the age of twenty-five she paid homage to the lineage of enlightened masters in a year’s retreat, completing 110,000 arduous full-length prostrations in one month at a back-breaking rate of 4,000 per day. Fortune led her, following a lama’s advice, to Dalhousie in 1963, where Freda Bedi had started the Young Lamas’ Home School and was helping Tibetan refugees. Although Ani Zangmo was not a refugee, her faith in the Buddha Dharma brought her into close contact with an especially courageous woman at the forefront of her time.

Freda Bedi was the first English woman to voluntarily enter prison as a freedom fighter under Mohandas Gandhi for Indian independence.  She became a close friend of Nehru, the first Prime Minister and his only daughter Indira and was appointed Social Welfare Advisor as the Tibetans flooded the borders of India escaping from the Chinese in 1959.

On meeting the Sixteenth Karmapa, the renowned hierarch of the Karma Kagyu tradition, Freda embraced Tibetan Buddhism and became the Karmapa’s chela or heart disciple. 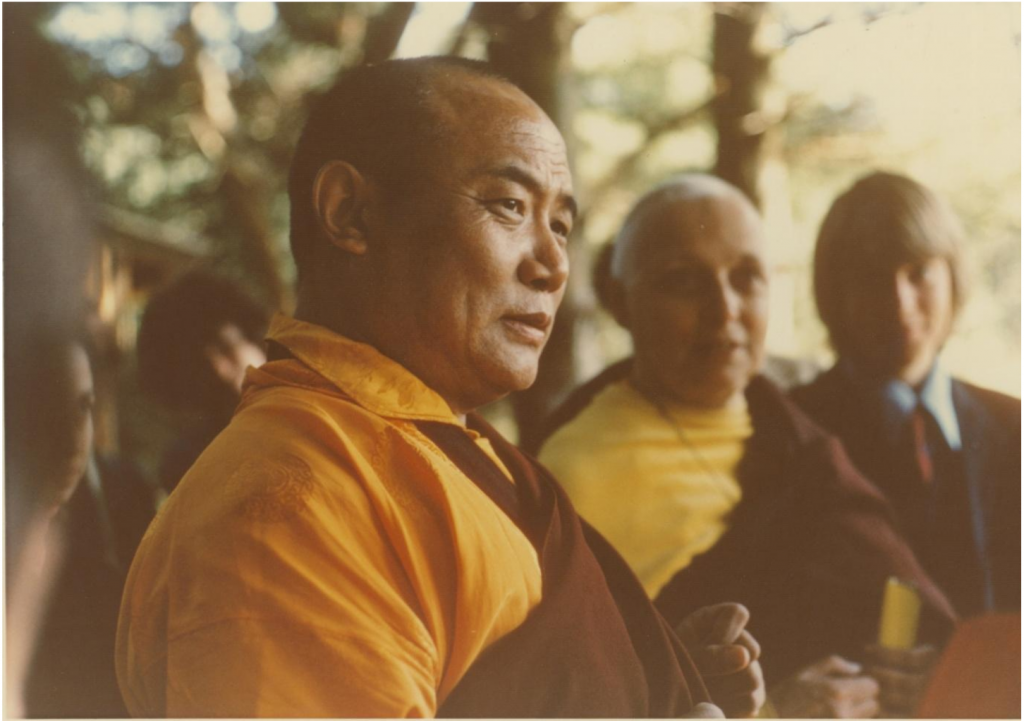 In 1966 at the age of fifty-five she shifted her focus from worldly achievements and family life to take ordination as a Buddhist nun. The Karmapa gave her the name Karma Khechog Palmo but like all the Tibetans, he called her by the more familiar but respectful Mummy-la. In the same year he ordained Pema Zangmo on his visit to Freda Bedi’s school for young lamas in Dalhousie. Ani Pema Zangmo was twenty-six.

Outwardly, Freda Bedi and Pema Zangmo seemed at opposite ends of the social and physical spectrum. Freda’s aristocratic demeanor did not reveal the fact that her parents were simple English country folk nor that her Oxford education, significant as it was, resulted in a graduation with only a third class degree.  She was elegant, fair, delicate but strong-minded; Anila Zangmo was robust, determined, and earthy in manner. What they both embodied with singular certainty was an intensity of faith and devotion to the spiritual path. And they shared a guru, the Karmapa.

Pema Zangmo became Sister Palmo’s attendant, serving her with devotion day and night, both on her numerous retreats and outside of them. ”Karmapa said to me, ‘Look after Mummy. Looking after me and looking after Mummy are the same.”’ On March 26, 1977, the night before the World Buddhist Conference was to begin, she attended Mummy-la on the last day of her life in their room at the Oberoi Hotel in Delhi. The miraculous signs she witnessed at Sister Palmo’s transition marked Pema Zangmo’s life forever, for one thing inspiring her to reach out to Westerners at Sherabling in contrast to the attitude of the suspicious elderly Tibetan monks.

I arrived at Sherabling two years after Freda’s death. You had to be strong to survive there. In winter leopards came down from the mountains and snatched small dogs and calves. The summer heat brought out the reptile population. Gigantic lizards like small dinosaurs emerged from behind thin exhausted trees to sun themselves on the rocks. Long thick muscular snakes slithered hastily out of sight at the sound of approaching footsteps. At night jackals prowled the forests, shrieking their relentless grief. The water supply dried up and we all suffered from dysentery. No cars, no paved roads, no phones, no taxis, no clean water, no ATM’s, no taps, no flush toilets, no culinary variety. Under these primitive conditions six Westerners were building retreat houses.

The sloping site I chose for my construction was at the furthest end of the same hillside as Pema Zangmo’s retreat hut, about a five-minute sprint on the topmost ridge. She walked unusually fast and came through the woods to arrive breathless at dusk after a full day in the bazaar procuring a consignment of black-market cement.

Barely had we exchanged greetings before she mentioned what was uppermost on her mind.  In broken English she related the highlights of Freda’s amazing story which emerged in bursts with every phrase an exclamation mark. ”Mummy-la, Mummy-la, Holy Mother,” she intoned excitedly as if to invoke her presence. ”She is very high incarnation. Karmapa said she is bodhisattva, White Tara emanation. All the lamas call her Mummy. She is like the sun shining. Everywhere is Dharma. People are all the same. She is real bodhisattva. Everything she gives away.”

Anila hurriedly blurted out the story of a remarkable death. ”When she die, her body get smaller and smaller and there are rainbows. I see it with my own eyes. Her death is very famous.” I listened with surprise. No one else seemed to be aware of what Anila was telling me, that this Western woman who had led a full, active life, had shown signs of enlightenment at her death. Miraculous signs in after-death meditation shown by great lamas are made known immediately to inspire their disciples. Thus there was something about Anila’s account that I felt did not quite ring true. My suspicion was confirmed when I asked Tai Situ Rinpoche about it; he was disinclined to commit himself as if the subject were taboo.

Sporadically over a few years at Sherabling and decades later at our meeting in Delhi, more fragments of Mummy-la’s story, as narrated by Pema Zangmo, came to light. ”The night she died,” Anila continued,  “I said ‘Karmapa is far away.’ She said, ‘Not far away. He is always with me.’ She said we needed the record of Karmapa chanting Lama Chenno, “Calling the Lama.” We played the Lama Chenno tape of Jamgon Kongtrul and Karmapa. She said, ‘My guru is always with me, not far away.’”

”That night she did Mahakala protector puja.  I made some bread, she ate, and then we talked. She gave me some advice. She said, ‘Tomorrow go to find some Lama.’ She put her clothes away nicely. She was wearing her normal ani robes, no zen.  She went into meditation. I didn’t sleep properly. I heard her breathing heavily. When I went into her room she was sitting in meditation, but she was gone, still in meditation.”